Minutes from the 2016 AGM are available to members on our Minutes page/section. 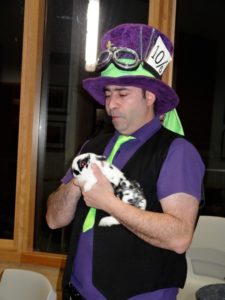 The Strathewen Landcare Dinner held in late July was again well attended by Strathewen Residents. It offered an opportunity for neighbours and friends to socialise over a lovely meal and to listen to an engaging speaker, Dan Harley from Zoos Victoria.

Dan boasts an impressive record. He conducted PhD research on the ecology and conservation requirements of the lowland population of Leadbeater’s Possum at Yellingbo Nature Conservation Reserve, and has led population monitoring at this site since 1995. Since 2003, Dan has also led field monitoring programs at several locations for highland populations of Leadbeater’s Possum, examining distribution and abundance, nest box colonization rates, the effectiveness of camera traps, fire impacts, and post-fire recolonization.

Dan has worked for Zoos Victoria since 2010, and his role includes identifying which species require captive-breeding programs, developing the priorities and strategic objectives for threatened species recovery programs, ensuring the captive-breeding programs are strongly linked with in situ recovery measures, and improving the effectiveness of captive-breeding and release programs. This work includes the identification of future release sites for Helmeted Honeyeaters and lowland Leadbeater’s Possums.  He is currently a member of five threatened species recovery teams in Victoria.

Dan’s presentation covered many of the aspects of his work and clearly indicated the massive task required in the recovery of threatened species, in particular the Leadbeater Possum. He was extremely well received by an appreciative audience. When talking to Dan after the presentation, he was most enthusiastic and felt that the highlight of his evening was listening to the many stories of local fauna related to him by Strathewen residents. He expressed the opinion that Strathewen is an environmentally rich area that is lucky to have residents, both old and new, so evidently connected to, and willing to care for, the land. He hopes to return and talk to us at a later date.

Whilst the adults were engrossed, the children were well entertained by magician Serge from Balloonaversal. Much fun was had by all and at the conclusion of the evening they all emerged clasping the most ornate balloon creations. We were indebted to him for performing beyond his schedule to allow for Dan’s extended talk.

Once again Strathewen Landcare Group would like to express its appreciation to Strathewen Bushfire Relief Trust for providing the funds to cover the cost of the event.

Now it’s time to look forward to spring, starting with our next general meeting, Monday, September 25, at 7.30pm in the Strathewen Community Hall. See you there!

Looking for minutes of our most recent meetings? Go to the Member Login page and then to Minutes, Newsletters, Etc. 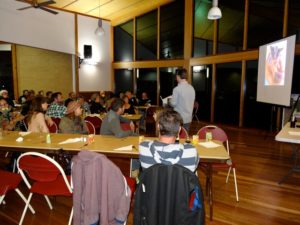 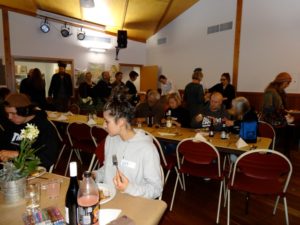 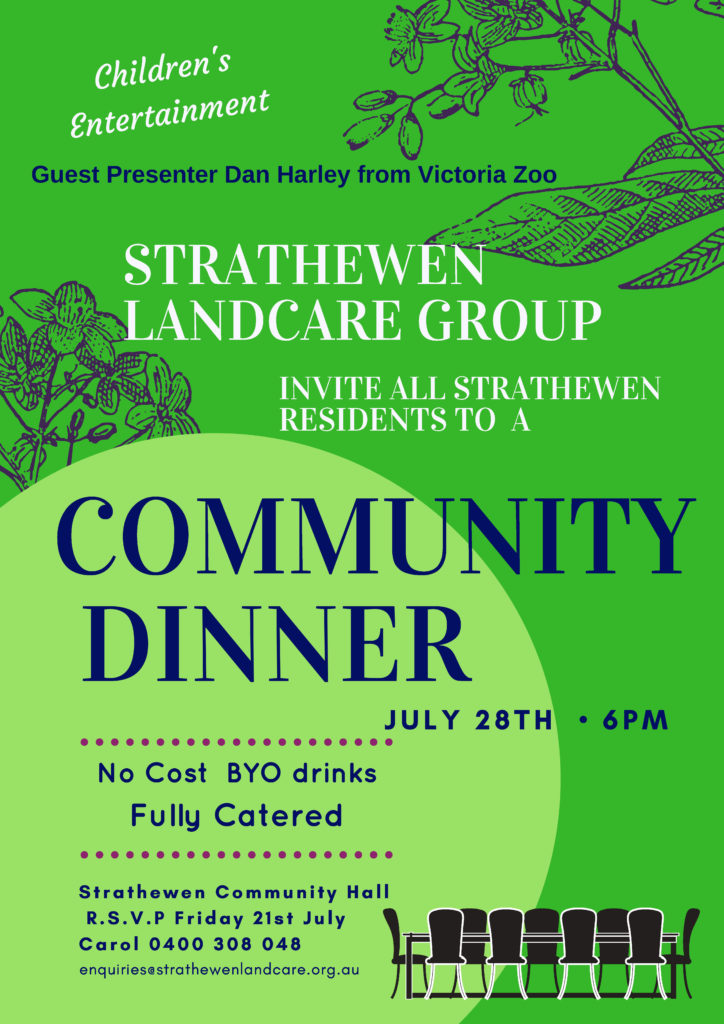 Come have dinner with us! Our annual Community Dinner will be Friday, July 28, starting at 6pm in the Strathewen Community Hall.

Entertainment will be available for the kids (Magic! Balloons!) and the rest of us would be thrilled to catch up with you and see how you’re going as we settle into winter.

You don’t need to bring a thing — except your favourite beverages. Landcare will take care of the rest. Now that sounds like a great night out!

In other news, our next meeting is Monday, July 24, at 7.30pm, at the Strathewen Community Hall.

Looking for minutes of our most recent meetings? Go to the Member Login page and then to Minutes, Newsletters, Etc.

Chilean Needle Grass and Serrated Tussock will soon ring warning bells because they are ‘different’ from your normal pasture or native grasses and they spread rapidly. 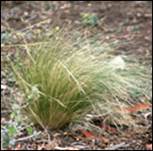 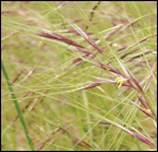 Refer to the Weeds of National Significance Management Guides for both grasses:

These guides provide a great introduction to the weeds and explain clearly why we do not want them to spread into Strathewen. For more detailed information, browse the internet or go straight to DEPI’s web pages:

Missed it but want to know more?

Please use this as an opportunity to learn about the control of Smilax and also to help stop it invading Strathewen.

Finding the small plants in an emerging infestation is part of the challenge.

Click here to access an informative brochure about Bridal Creeper / Smilax produced by the Australian Government. For more information refer to their Weeds in Australian website.

We need your help
Strathewen Landcare have been funded for two years to control the spread of four highly invasive weeds into Strathewen:  Smilax (Bridal Creeper), Chilean Needle Grass, Serrated Tussock and Paterson’s Curse.
At important times of the year you will see our signs along the roadside reminding everyone to keep a look out and take action.  Please call the Landcare members listed below if you have any question or need help.
Some funding will be spent on contractors and herbicide to identify and eradicate Serrated Tussock, Chilean Needle Grass and Paterson’s Curse from our valley.

Paterson’s Curse
Paterson’s Curse is one of the easiest weeds to spot and if we act immediately and together we can be successful very quickly.  Paterson’s Curse, flowers during Spring through to Autumn.  It has a distinctive purple flower and produces many seeds.  Fortunately these don’t move very far from the parent plant unless carried by animals or water.  Most of Strathewen’s infestations occur in paddocks next to the Arthurs Creek but we’ve seen outbreaks along Chadd’s Creek Road and at the Strathewen Recreation Reserve.

During late Autumn and Winter the seeds germinate and produce a seedling with a flat,  bright green rosette.  This is the best time to take action because the rosettes are easy to chip or spray.
Now is the time to start looking.  If you identify a single rosette then you can chip it out of the ground. Plants don’t usually occur alone so if you find one look for others. 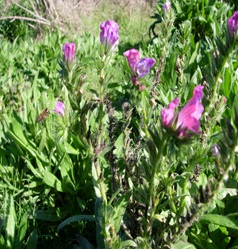 If you find a Patterson’s Curse infestation then Strathewen Landcare will help with herbicide and labour.    Please call Malcolm on 0427 356 803
For information and help with the other weeds call:
Steve 0407 326 770  for Smilax (Bridal Creeper).
Bronwyn 0414 882 946  for Serrated Tussock and Chilean Needle Grass.